What we do » Current Issues » Marathi » Alternative Tourism in Marathi 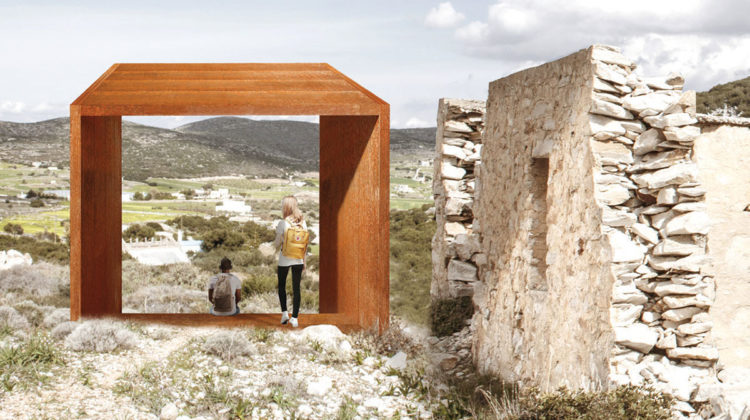 Two highly promising young architects graduates of the Vienna Technical University, Cristina Vlascici and Vadim Ghiorghiu, share with us their highly interesting thesis «Vision for Alternative Tourism in Paros, Antiparos and Despotiko» proposing the creation of the “marble route” and the promotion of Marathi ancient quarries.

In the recent decade, the Cycladic Islands have experienced a rapid growth in the touristic department, record numbers of tourist arrivals being set every year. This phenomenon creates pressure on the environment, infrastructure and local architecture. Santorini and Mykonos, the most visited islands in the archipelago, already reached a saturation point, being threatened by over-tourism. Reacting to the current local debates, which underline the urgent need for a change in the touristic and architectural fields, a strategy in the islands of Paros, Antiparos and Despotiko is developed.

Influenced since antiquity by the extraction of the marble, used for masterpieces such as Venus de Milo or Nike of Samothrace, this material is still very present in the architecture, landscape and local art of these three islands, but its meaning fades away as time moves on. Treating the marble as a conceptual guideline and by reacting to the local, individual context, projects are being designed on each island in an attempt to present an alternative touristic strategy.

The Thesis proposes a new touristic route, named “The Stone Path Strategy”. It emerged as a critique to the conventional tourism, that seem to transform the islands of Paros, Antiparos and Despotiko into places without an identity, with an ephemeral character, where the passing trends of modern tourism overshadow the individuality of the islands. Focusing on eight carefully chosen points of interest, that integrate the material of marble as an architectural, cultural, historical or traditional centerpiece, the strategy enhances the specificity and distinct character of the islands. Each chosen stop shows a different characteristic of the marble, the diversity of its uses and its evolution over history: its important value (Parikian Kastro), its plasticity (Archeological Museum), its significance (Quarries of Marathi), its diverse usage (Byzantine Road and Marmara village), its importance in contemporary times (Nikos Perantinos Sculpture Museum), its architectural qualities (Kastro of Antiparos), its complex history (Island of Despotiko).

This proposition aspires to change the perception of the modern visitor of the Cycladic islands, absorbed by the superficial portraits of the islands in the mass media, unable to distinguish the uniqueness and particular features of each environment.

The new implemented approach tries to engage and promote also the inland areas of Paros and Antiparos, partially abandoned in the frenzy of the tourism development, apparent unable to meet the needs of the contemporary tourist. The negative impacts of the tourism: its pressure on the infra-structure, the environment and its resources, are acknowledged as a main threat of the current touristic development and as a consequence, the new strategy involves expanding the tourist season in the autumn and spring months.

The Stone Path concentrates on the three islands of Paros, Antiparos and Despotiko, the last two being defined in architectural proposals, while the main focus lies on the Quarries of Marathi.

The quarries, representing an important foundation in the ancient history, are today neglected, while their memory seem to fade away. They are in a deplorable state, unsafe and inaccessible, a source of disappointment for the tourists who are curious of visiting the ancient site. Reviewers from TripAdvisor recognized the decaying state of the quarries, but also discovered their potential: “Interesting place but lacks information.”, “I would not recommend a visit far inside due to the safety issues.”, “This could be a re-ally nice place to visit if there were more information and there could be guided tours into the cave.”, “Interesting, but difficult to visit.”, “[…]It was really evocative. If this were on a more traveled island, a lot more money would be poured into it, to make it a real tourist destination.”

The project acknowledged the issues described above and acts upon them, by proposing a strategy that focuses on reviving the ancient quarries and introducing new ideas that challenge the concept of marble, but also concentrating on the site of Marathi, with its ruins, vegetation and topography. The Stone Path Strategy originates from the Marathi site, as the marble originated from its quarries and develops strategically on the three islands.

This diploma aims to demonstrate how an alternative solution in the growing tourism sector could positively influence the quality of tourism, the relationship between the local inhabitants and the upcoming visitors, the architectural, cultural and historical heritage of the chosen Cycladic islands. The identity of the islands was always strongly connected to the topic of the marble, in a historic, architectural, cultural and economical sense.

This thesis establishes a revival of this topic, by focusing on its importance, its specific qualities, its strong local presence and its meaning in today’s culture. The designed interventions are not just a tool of reusing the architectural values of the islands, ensuring their continuity in time, they try to open the horizon of the visitor, caught in the ephemeral character of the modern tourism and guide him through the story of marble into a new type of tourism, aware of its context.

While 100% of donations are devoted to the cause for which they were donated, membership fees must cover the running costs of the END_OF_DOCUMENT_TOKEN_TO_BE_REPLACED