Recent Articles » Friends of Paros: “the new Archaeological and Cultural Park in Marathi can start operating in 2022” 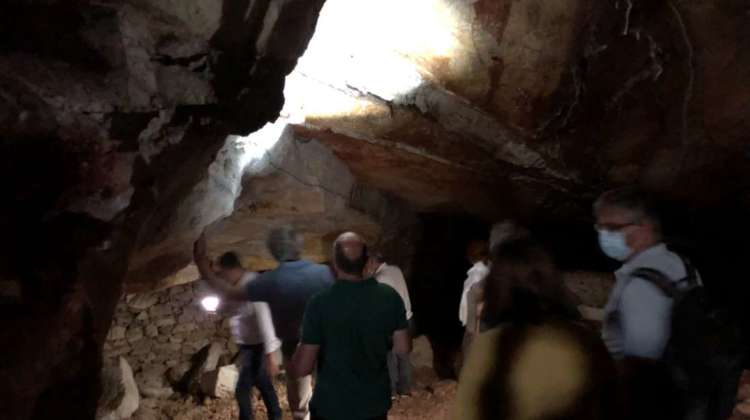 It’s three months since the well-attended online meeting organized by the Friends of Paros and Antiparos to rescue and promote the ancient marble quarries, and many small steps have already been taken in this direction. This meeting triggered the process of the creation of an archaeological and cultural park at the archaeological site in Marathi, through the collective efforts of all of us: the Ephorate of Antiquities (EFA) of the Cyclades, the Municipality of Paros and various local associations. In this direction, the FoP&A work systematically and play a coordinating role to implement the initial phase of operation of the Park before the summer of 2022.

Among the issues being tackled at the initiative, or with the assistance of the FoP&A are:

Of primary importance is the issue of stability and accessibility of the monument of the ancient galleries of the quarries of the Nymphs and Panos. On Thursday 10/6, with the initiative and participation of the FoP&A, a very productive meeting took place on-site and a visit to the galleries by the senior members of EFA Cyclades Ms Zozi Papadopoulou and Mr Giannis Mitsoulis and the specialist geological engineers Mr Dem. Egglezos and Mr Evagg. Astreinidis and the professor of NTUA, Mr Vassilis Marinos, also met with the Mayor, Mr Kovaios and representatives of other local associations. The FoP&A organized the meeting and covered the travel expenses of the specialists.

All parties agreed that immediate priority should be given to monitoring the stability of the ancient galleries using special equipment and necessary preparatory work to make at least parts of the galleries accessible to the Park visitors.

The FoP&As are actively involved in the activities of the European Underground4Value  Programme and the working visit to Paros of researcher Tommasina Pianese and Project Director Giuseppe Pace. The inclusion of Paros in this programme has followed on from the invitation by the  FoP&A to Mr Pace in November 2019 for the workshop on ancient quarries. The programme offers opportunities for Paros to draw information and advice from the positive experiences of other regions abroad.

A significant development is the positive response of fellow citizens and friends of the island to the call of the FoP&A for the creation of a Circle of Ancient Quarries with volunteers willing to contribute practically with their enthusiasm, knowledge or financial support in the effort to protect and promote this cultural treasure through the creation of the Archaeological and Cultural Park in Marathi.

As a next step, the FoP&A organize on Saturday, July 3 at 9:30 am a visit to the archaeological site and a discussion on the steps needed to make the new Park operational in its initial stage in 2022 and to gradually develop it in its final form, a process in which we can all contribute.

The programme of the visit and discussion of July 3 will be published shortly here.

While 100% of donations are devoted to the cause for which they were donated, membership fees must cover the running costs of the END_OF_DOCUMENT_TOKEN_TO_BE_REPLACED