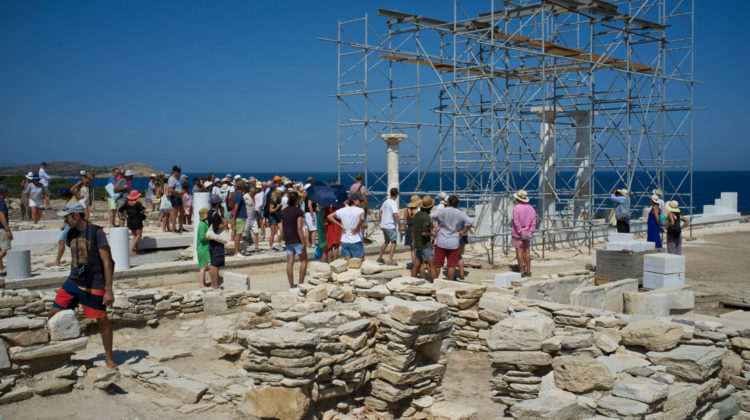 From the 7th to the 5th century BCE Paros was an important place in the Hellenic world, thanks to its large natural harbor, known as very safe, and its famous marble. Parikia was a large prosperous city of 3 to 4 thousand inhabitants, surrounded by a wall whose boundaries stretched far beyond the present ring road that bypasses the present city.

From this period there are still many vestiges that the excavations of the archaeologists have brought to light and which they continue to discover. The Archaeological Museum of Paros has a collection of statues, amphoras and rare objects of great beauty and several pieces made by Parian artists and artisans are found in museums all over the world.

A large number of visitors do not yet know enough about the glorious past of the island and its rich ancient remains. Moreover, the relative shortage of budgetary means available to the public authorities (archeology services, town hall, region) does not help archaeologists to start new projects and, above all, to showcase the monuments and remains already discovered.

“The Friends of Paros”, for several years, have raised public awareness of the ancient past of Paros by organizing several guided tours of the sites, through the publication of a brochure of multilingual information, the organization of conferences by archaeologists and the publication of articles in their magazine – the Bulletin. More precisely, in the issue 12 of their magazine (autumn 2016) there is a detailed presentation of all the archaeological sites in Paros which would first deserve a better valorization (see in Greek: https://friendsofparos.com/η-ανάπτυξη-της-πάρου-μέσα-από-την-ανάδε/ and in French https://friendsofparos.com/le-developpement-de-paros-par-la-valorisation-de-ses-richesses-archeologiques/).

But as of this year they want to move on to higher gear by deciding, via their board of directors, to create an archaeological commission of the association, currently composed of 3 people: Isabelle Caillaud, Chantal Mérieux and Dimitra Guibert. This commission will act to implement independently the guidelines decided by the Board of Directors.

This archaeological commission will make aware the Parian society in all its diversity, of all the different types of valorization that are necessary and, in a second phase, launch a campaign to raise the funds needed to highlight two projects deemed to be priorities.

The development and maintenance of the ancient cemetery in Parikia is considered a priority because it is one of the best preserved cemeteries in the Cyclades. The cemetery is located on the seafront, opposite the Marina, but a few meters below the level of the current street, which poses several problems. A study approved by the Cycladic Antiquities Commission, aims to raise the entire site at the level of the current street and thus protect it from stagnant water, while making it more visible to passers-by.

2- THE TEMPLE OF APOLLO IN DESPOTIKO

The excavations carried out over the past 20 years have made it possible to discover in Despotiko the most important temple of Apollo, which was the place of worship of the inhabitants of Paros. This is a major discovery hailed by the international journal “Archeology,” which in its April-May 2016 issue devotes its cover and several articles to it. The excavations which still continue have made it possible in particular to discover several parts of the columns of the entrance to the temple. The project consists of re-erecting the entrance of the temple by associating the old parts of the columns with new parts, thus giving visitors the feeling of its magnitude.

An information meeting will be organized on 20 August 2017 in the presence of the responsible archaeologists to present these two projects and give all the necessary details on the needed work for their accomplishment.

These projects will require a budget of approximately 60,000 euros. We believe that this budget is within our reach especially since the town hall seems to want to help also.
A separate bank account from the usual activities of our association was opened for this action
Other activities are envisaged for the collection of the necessary fund, in complement of other private or public foundations that engage in cultural funding.

For the Archeology Committee of the Friends of Paros,

You can join the association « Friends of Paros » by filling the form HERE.

While 100% of donations are devoted to the cause for which they were donated, membership fees must cover the running costs of the END_OF_DOCUMENT_TOKEN_TO_BE_REPLACED