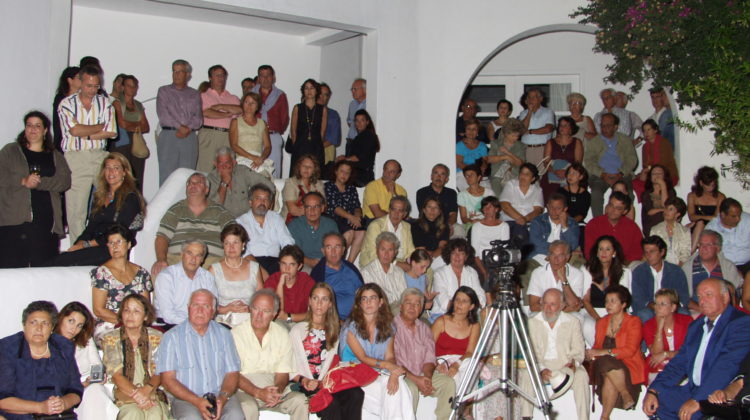 The annual event of the Friends of Paros association takes place every August in Paros. It is both a celebration and an opportunity for the members of the association, coming from across Greece and abroad, as well as all Parians, to get together, exchange views and work together to address the issues facing our island and make plans for the future.

THE ANNUAL EVENT OF THE FRIENDS OF PAROS

The annual event of the Friends of Paros association takes place every August in Paros. It is both a celebration and an opportunity for the members of the association, coming from across Greece and abroad, as well as all Parians, to get together, exchange views and work together to address the issues facing our island and make plans for the future.

The event is honoured by the presence of the Mayor and the Head of the Provincial Administration of Paros, Members of Parliament for the Cyclades Prefecture, as well as leading local community figures and many residents and friends of the island. Since 2003, as part of the event, an award ceremony has taken place recognising people or organisations whose unselfish work has contributed significantly to the achievement of the Friends of Paros association’s aims.

This important activity of the Friends of Paros is intended to recognise and promote achievements in the local community that contribute to the preservation of the cultural character and environment of our island, and set an example for others to follow.

At the moment, a great many activities, resulting in part from the special character of Paros and the Cyclades, are proving destructive, damaging the Cycladic environment and leading, if unchecked, to the overwhelming of its aesthetic uniqueness, erasing local values and traditions. The Friends of Paros seek to promote activities which aim to overturn this mentality, creating instead a “virtuous circle” of thought and social conduct.

The members of the Friends of Paros association consider that we should not only criticise what is wrong but we should also congratulate positive developments, and not hesitate to praise those who with their actions are contributing to the preservation and enhancement of the Cycladic character of our island.

The following distinctions have been awarded to date:

2003: Mr A. Popolanos, Agronomist and Oenologist, for his contribution to the promotion of quality wines of Paros by helping to establish the designation “VDQS-Paros”, making them an “ambassador for Paros” throughout the world.

2004:  Mr H. Georgousis, president of the local “Archilochos” association, for the important activities of the association, as its president, along with its members, over many years in the fields of culture and the environment.

2005:  Mrs Lydia Karra, Vice-President of the Hellenic Society for the Protection of the Environment and Cultural Heritage, for her role in raising awareness of the threat to the Cycladic environment posed by uncontrolled construction activity, with her film “Voice of the Aegean”; and

Mr K. Gouzelis, Architect, for his contribution through the television series “The Aegean Now and for Ever”, for raising awareness of the environmental values of the Cycladic islands and their cultural inheritance.

2006:  Mr J. Pack, Director of the American School of Fine Arts, on the occasion of the 40th anniversary of the establishment of the School in Paros and for spreading the “light of Paros” throughout the world through its students; and

Mr N. Sarris, teacher, farmer, (and, above all) musician and sculptor, for his contribution to the linguistic and musical education of the young people of Paros and, generally, for his work in the field of culture.

2007:  The Naoussa and Paroikia Dance Groups for their contribution to the preservation of the cultural traditions of Paros, and the Aegean islands in general, as well as for the international promotion they offer the island.

2008:  The museums of Paros for their decisive contribution to the preservation of the cultural heritage of Paros and the projection of Paros internationally. Read more..

While 100% of donations are devoted to the cause for which they were donated, membership fees must cover the running costs of the END_OF_DOCUMENT_TOKEN_TO_BE_REPLACED