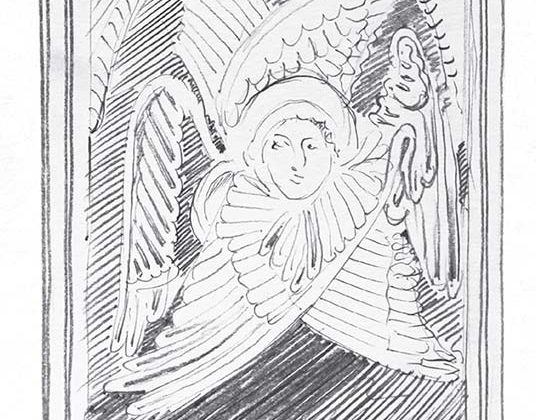 In the fifth and last chapter we continue, dear reader, with the presentation of the monasteries of our beloved island. After the monastic sites near Parikia, Naoussa and Lefkes come those those of Marmara and Aggeria. We recall that the first chapter concerned the symbols and traditions of Orthodoxy and the second chapter the presentation of monastic life. These five chapters constitute an indivisible entity which is at your disposal on request.

In the region of Marmara

The monastery of St. George Lagadas

The drive to this monastery, above the gorge that descends from the mountains to Drios in the southern part of the island, is very beautiful. The walk is even more beautiful, but make sure to have enough water with you and wear appropriate shoes because it is not an easy walk! 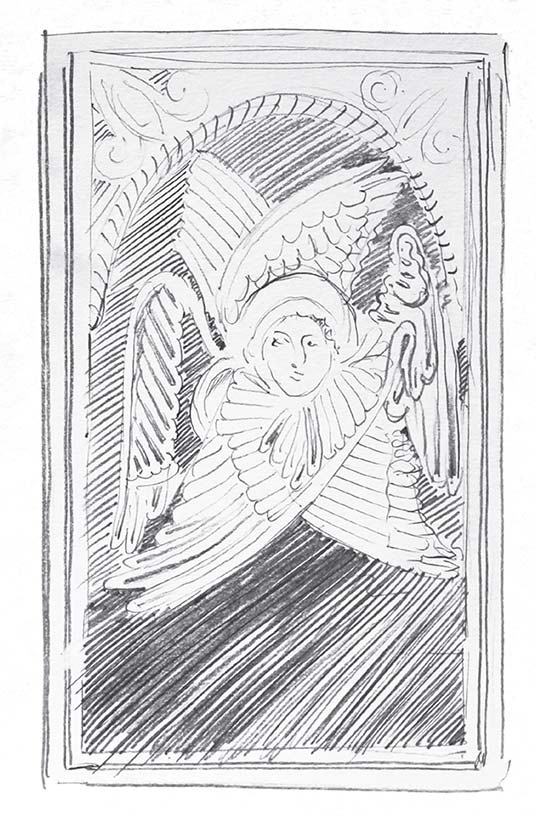 The monastery was built in the 17th century. Seen from below, it is an imposing building. Before you get there, you have to bend a little to get under a beautiful arch. Look at the marble floor and polished stone by the feet of thousands of pilgrims. Then if you turn right, you go down the spiral staircase to the sacred well which provides abundant water. Or, if you like adventure, you can try to find the “cave of demons” at the hills just above the parking lot.

Many famous theologians and religious leaders have stayed in this monastery for the past centuries. If most of them are not known, one of them stands out: Saint Arsenios of Paros. On the upper floor of the monastery, just above the temple, there is still the tiny ascetic cell where he slept and prayed. This cell will make you see your hotel room with another eye! Today, the Archbishop of Paros-Naxos lives in this monastery every time he leaves his home in Naxos.

The monastery today is reborn, with the help of the Bishop and a young monk whose energy and enthusiasm for religious life deserve to be known. Entering the courtyard, you find yourself in a lovely indoor garden. On your right is the chapel, on the left is the staircase leading to the common areas. Opposite, you will notice a large wooden board hanging on the side. It is the wooden “talanto”, which hit with a wooden hammer at a precise rate, is used to wake the monks in the middle of the night to pray. The sound produced is powerful and deep spreads throughout the monastery and makes the prayer even more aerial.

The chapel, recently renovated and cleaned to shine under the sun, is known for its carved wooden iconostasis and icons of the seventeenth century. It is rather small for the size of the monastery, but the monks want to have a sense of closeness at the time of prayer and the small space brings them closer to God.

Monasteries were economically self-sufficient and often helped many poor farmers living in the area. From the courtyard, you will see the goats of the monks on the mountainside. A simple call from a monk is enough to bring them back to their pen (right down to the entrance). Even the dog of the monastery looks nice, running to all those who show up at the entrance. 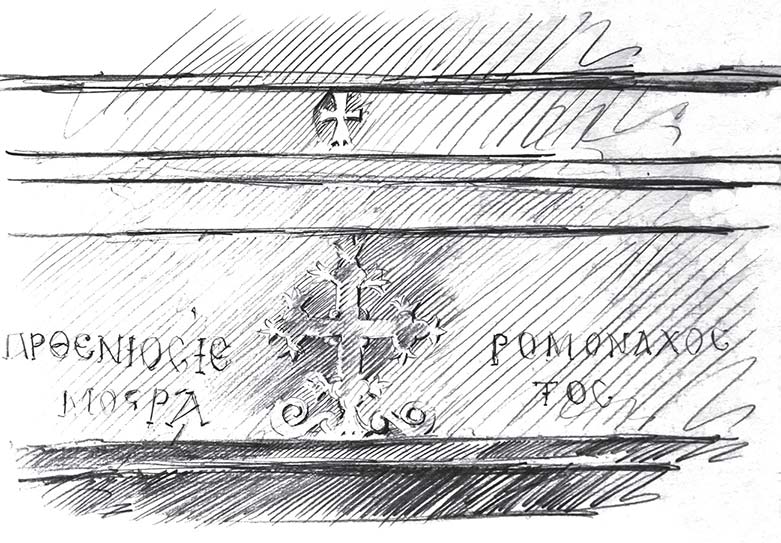 The monks represent the best in terms of environmental protection. They take unnecessary stones and make amazing buildings. They work rocky soil and create beautiful gardens. They grow their own vegetables without artificial fertilizers. They drink clean water from the well and give it to their animals. They cooperate with the rest of humanity and with all Nature in harmony and respect. The monks were the first environmentalists !

This very harmonious relationship with the environment, where men do not want to dominate everything, is the subliminal message of the monastery to us, the pilgrims. This harmony is heaven, a harmony that plunges you into serenity from your first step at the entrance and continues long after your visit as you descend through the beautiful surrounding nature, in the world in which you live. There may be the cave of demons near the monastery, but in our time, it seems that the demons have left the cave and descended into the cities.

In the region of Aggeria

The monastery of Agioi Theodoroi.

This monastery, where you arrive (by car or on foot) crossing one of the most difficult roads of the island, was built in a place considered sacred since antiquity. At the very beginning, high up on this mountain, where the monastery chapel is now, the Ancients had built a temple dedicated to Apollo to oversee the entire island. This ancient temple was built by Archelaus, director of a lyceum (learning and sports center), during Roman times. At that time, as now, people believed that the mountain peaks were closer to the homes of the gods and so they functioned as links between the kingdom of the gods and the kingdom of men. The monastery of Agioi Theodoroi perpetuates this tradition, uniting heaven and earth in a magnificent landscape. 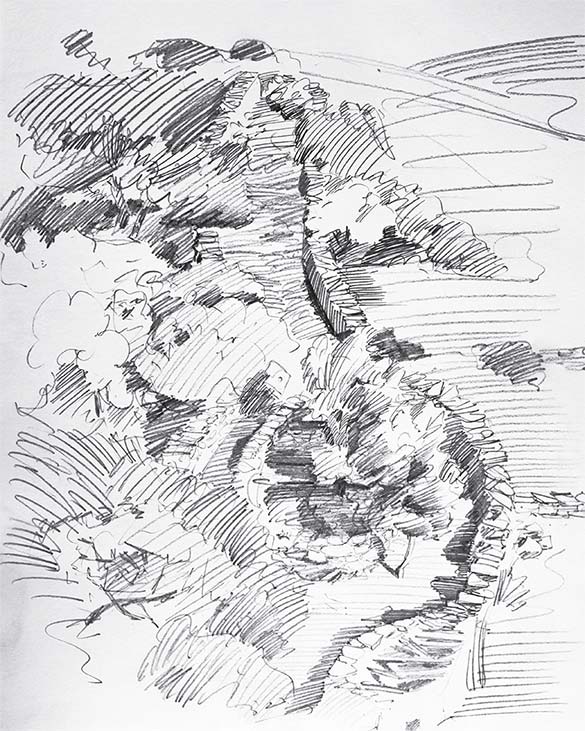 The nuns who live here have created their little paradise. On the rocks, they slowly built terraces and built hanging gardens, bringing soil and manure from the foot of the mountain. The walls protect the gardens from strong winds that almost always sweep this place. The sound of the wind makes the monastery even more sublime and gives you the impression that you have left the kingdom of men and entered the kingdom of God. The nuns live in autarky: They have apples, peaches, pears, apricots. Here, they grow their own wheat for their bread and their own vegetables, they produce wine, oil and they have their own cheeses. In the mountainous landscape, they have transformed this barren land into a paradise of plenty.

The church in the center of the monastery has its own story. As we said, it was built on the ruins of an ancient temple of Apollo. Later, in the 16th century, a smaller church was built, which was demolished, unable to withstand the wild winds. Later, in 1928, this holy place is reborn with the erection of this monastic chapel. Sacred space on a sacred space, recycling again and again the riches of spirit for each generation.

If you enter the chapel, you will encounter a beautiful but not impressive iconostasis. But look behind the episcopal throne: When you are right in front of the icon, the seats are behind you at your right. You will then see a pro-feminist painting that will take away your heart and your mind. It is an icon of Saint Barbara, probably made by an old priest, that the hagiographers generally draw by holding the chalice and the spoon of the Divine Eucharist. Around the Saint, there are bishops and other members of the clergy, smaller, less imposing, and it is obvious that they are not the ones who have the power. The nuns here know that it needs great courage and faith to be a woman in a male-dominated church. This icon, though hidden behind the throne, takes the dimensions of a monument to their mind.

The monastery of Saint Charalambous

Monasteries change their identity. It does not happen often, but it happens. This monastery was initially dedicated to the theologians Kosmas and Damianos (called Anargyri) in 1657 by a priest named Nikolaos Skiadas, who together with his brothers Ioannis and Armandos, decided to lead a common monastic life, which they probably did for many years. Later, the monastery was dedicated to Saint Charalampos, a highranked priest of the Orthodox Church, having probably passed into the hands of the famous Mavrogenous family. In 1793, Maria Mavrogenous, widow of the Nikolaos Mavrogenous, donated the monastery to the Basilica of Parikia, Ekatontapyliani. Two families, with different orientations of worship, gave two different identities to this monastery : one seeking medical therapy of patients as well as their spiritual healing, under the sacred aegis of Kosmas and Damianus, while the other including many warriors, put more emphasis on the miraculous power of Charalampos. The two names are well indicate these two different periods. 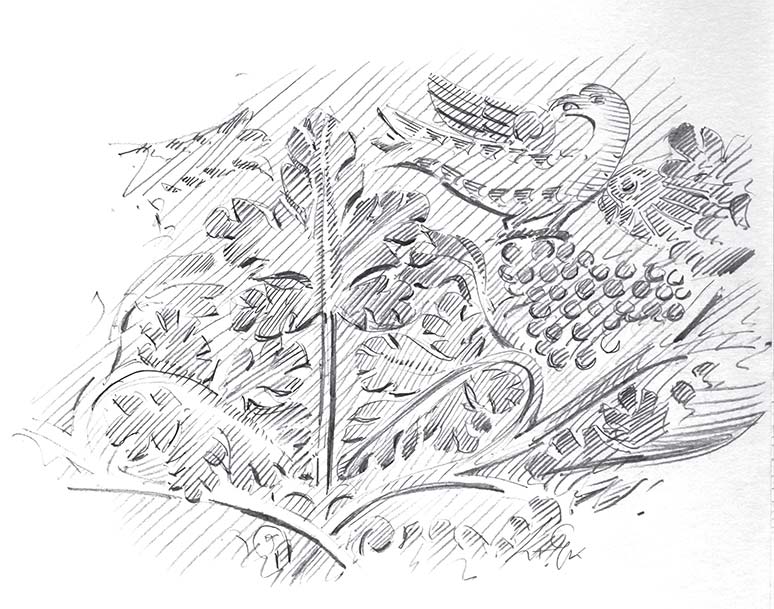 The Greeks, in general and more particularly the monks, give more importance to names than the rest of the Western world. They usually give to their children the names of their grandparents in order to keep alive the memory of past generations. In Greece, the nameday, that is to say the celebration of the memory of the saint who gave his name to someone, is more important than the birthday. The names connect not only the previous generations to the next ones, but also the sky to the ground.

In front of the monastery is a magnificent little stone bridge. It is worth going there. The bridge passes over a small stream, which usually has little water in summer. But there is yet another function: On both sides of the bridge, there are two small basins that are used to transfer water from the tank of the monastery to the fields located on the other side of the river. Thus, the bridge not only connects the two banks of the stream below, but it also carries water in one direction, while helping people to walk along the other.

Monasteries unite human beings – monks and nuns with their visitors, not only of today but of all times, bringing people together and transmitting their common religious values. But monasteries also connect this world to the celestial kingdom. They unite heaven to the earth, God to humanity, the divine to the laity. Whatever their identity, be they dedicated to Kosmas and Damianos or Charalambos, the monasteries act as bridges, vertically and horizontally.

While 100% of donations are devoted to the cause for which they were donated, membership fees must cover the running costs of the END_OF_DOCUMENT_TOKEN_TO_BE_REPLACED