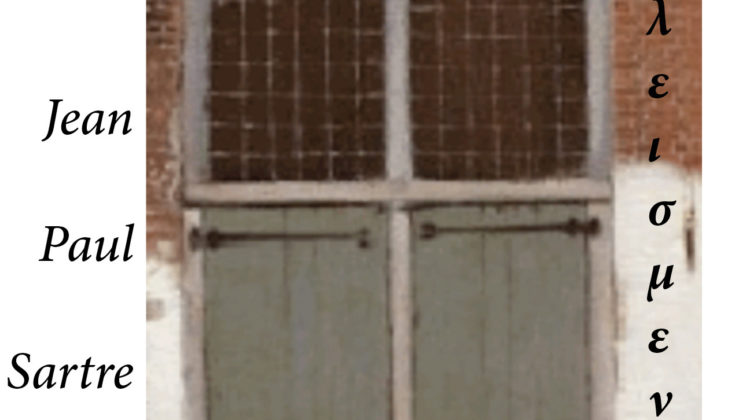 A tribute to 7 theater groups and their work that still proves once enormous creativity and intelligence of this place and its inhabitants. 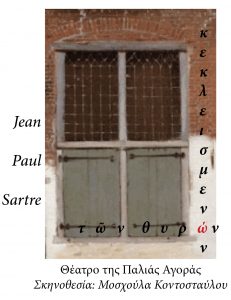 Τhe theatre of the Ancient Agora is an independent small theatre society which functions like an informal academy and is blessed with the hospitality and encouragement of the K.D.E.A.P. and the Municipality of Paros. It stages what are generally considered difficult and important plays, both Greek and international, always striving to do justice to the playwrights and previous successful stagings of the plays.
Moschoula Kontostavlou directs and teaches, continuing her 25 year long association with the theatre in Paros, originally in the Archilochos chamber. This year’s production of “Huis Clos” by Jean Paul Sartre was staged with the involvement of the permanent acting team, consisting of Mrs Emmy Dimitrakopoulou, Mrs Chryssa Simitziri, Mr Vangelis Chademoglou and Mrs Kontostavlou herself.
In the Municipality’s impressive Arts Hall, which has a capacity of only 35 people, 450 spectators participated over 15 performances, always filling the Hall with remarkable appreciation not only of this year’s but also of all previous productions.
The society thanks them and all of you, especially the Municipality of Paros, and the K.D.E.A.P. and the A.M.E.A. ladies too.

2- The Association of Women of Marpissa’s Theatre Society 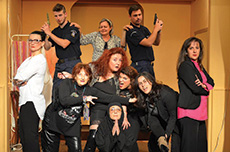 This Theatre Society was created in October 2009 with the cooperation of The Association of Women of Marpissa and the Marpissa A.M.E.S. We wish to thank all those who, over the years, have acted in our theatre productions and who have dedicated their time to this cause, particularly our director for his valuable advice, but also everyone else who has contributed in their own special way. 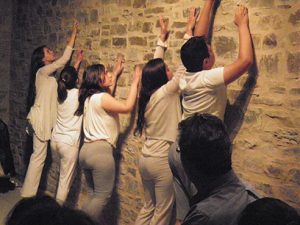 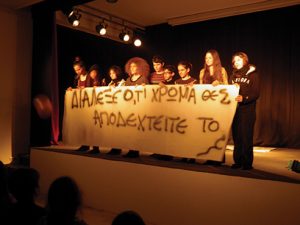 Naoussa Children’s Club Theatre Society started in September 2008 as part of the Naoussa (Paros) Dance Club. It was the brainchild of teacher Panagiotis Spyrou who set up, encouraged and worked with the Society. With the passage of time the Society firmly established itself amongst the island’s other theatre clubs.
One of the earliest productions which raised the Society’s profile was the Christmas dance/theatre play “The Doll” in 2007. Today the Society consists of children from all over Paros with separate groups for teenagers and younger children, both of which are supported by a group of adults.
It is a children’s theatre which stages contemporary children’s plays and attracts spectators of all ages.
In the last year George Yemeliaris has been supporting and guiding the younger children’s group whilst Babis Tsirakis has been guiding the teenagers’ group. 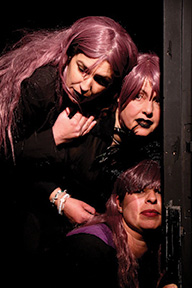 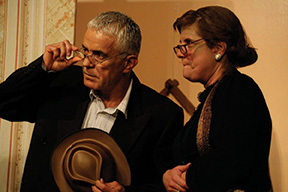 A.M.E.S. Nirea’s Theatre Society was first started in 2005 by a small group of friends, “theatre lovers” as they light-heartedly refer to themselves, who were looking for something creative to do during Paros’s quieter winter months. Their dream and aspiration has been to grow in numbers and attract ever younger members as time went by.
Eleven years since the Society’s creation, all of its targets have been met. It has offered laughter, emotion and food for thought in abundance and always of the highest quality. Every year both young and older members support the ”cast” with new ideas for the benefit of both the actors and the director.
Despite the difficult economic circumstances we are facing, each and every new performance offers ample creative opportunities to its participants as well as providing a cultural upgrade for our island’s inhabitants. 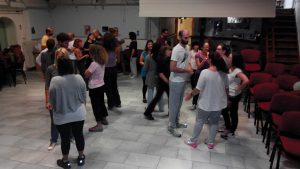 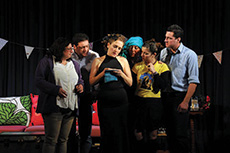 The Archilochos Theatre Society has been active for twenty years on the island of Paros. It has staged a rich repertory of high quality productions and every year it takes part in festivals such as the Aegean Amateur Dramatics Festival. The Society’s purpose is to offer the public theatre plays which will entertain and amuse, whilst in the winter months it satisfies the “culturally restless” inhabitants of the island.
The theatre workshop of Archilochos was created in 2012 by George Yemeliaris. Its purpose was to introduce the art of the actor to the Parian public.
The lessons are divided into two parts. The first part is an introduction to the concept of acting with exercises, improvisations and games. The second part is the casting of roles from international and Greek theatre plays applying the basic concepts of acting, with a view to staging two performances by the students at the end of the year. 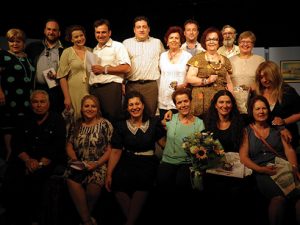 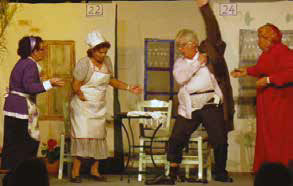 This Society was formed in 2001 by members and friends of the Naoussa Women’s Club aimed at their creative engagement, especially during the winter months. However, as time went by, its efforts intensified, resulting in the staging of important plays by both Greek and international playwrights, as well as of first productions by Naoussa’s home-grown “creators” of theatre.
A valuable friend of the club, Mr Yiannis Tripolitsioti, guides the Society, holds the position of director and is also responsible for the general management of performances.

A group of theatre lovers gathered together in September 1985 in Paros’s Naoussa and decided to deal more systematically with amateur dramatics at a time when such activity was in its infancy. The project started in cooperation with local schools and slowly spread to other areas such as NELE and others. In 1993, Naoussa’s Theatre Society joined the music & dance group “Naoussa Park” with parallel activities in traditional dance, music, the creation of a museum, the cataloging of folklore related materials and the organisation of musical performances.
The Society’s performances take place in Naoussa, but they often travel to other parts of Paros and to other Cycladic islands. Performances have also taken place in other parts of our country as well as in Constantinople and Cyprus. The Theatre Society has taken part in many conventions of Aegean amateur dramatics societies and has represented the theatre of the Aegean in Cyprus in 2006.
In recent years, the Society is active on two fronts: a Children/Teenagers’ Theatre with Sofia Angelopoulou and an Adults’ Theatre with Ypapandi Roussou, each staging the corresponding type of plays. The Society‘s aim has been to bring the Parian public closer to the theatre and to give all those with cultural interests a way to explore them.

Many thanks to Isavella Sarantakos  for her kind offer for the translations  of the Theatre Groups texts.

While 100% of donations are devoted to the cause for which they were donated, membership fees must cover the running costs of the END_OF_DOCUMENT_TOKEN_TO_BE_REPLACED