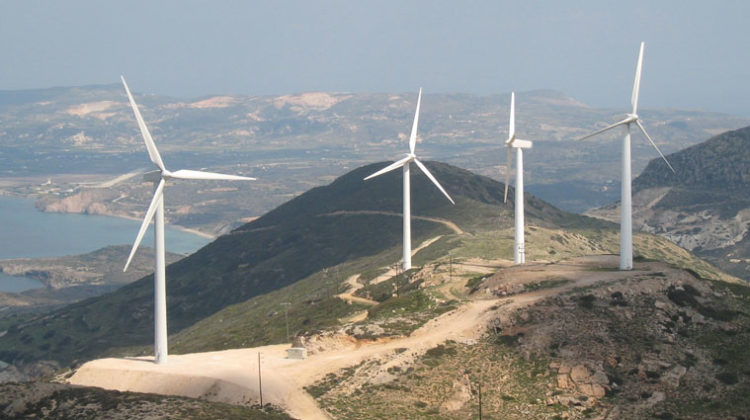 What does the investment for new wind turbines cover?

The investment comprises the installation of wind turbines (‘wind farms’) in four islands (Andros, Tinos, Paros and Naxos), plus a separate interconnector with mainland Greece. It received approval from the Regulatory Authority for Greece (RAE) in 2010.

Who is the investor?

The Kopelouzos Group. The Italian ENEL Group is shown as a major shareholder (30%) in a June 2011 modification of the RAE permit.

Has this investment been approved?

Yes! RAE has issued ‘production permits’ in 2010 and subsequently several modifications at the investor’s request; the most recently published modification was in March 2012. (It is a set of permits for each of several companies owned by the same investor. In the case of Paros two companies together have permits for 8 wind farms).

Are there any further approvals required before the wind turbines can be installed?

Yes! 3rd stage ‘installation permit’ to be issued by the Ministry of Environment and Energy. There is no public record of such a permit and now the Municipality is seeking confirmation that this remains the case.

Also, the opening of new access roads will require permission from the Municipality. But the access road to the existing wind farm went ahead without such permission.

How many wind turbines and in which locations are envisaged?

32! This is the total number of wind turbines for Paros in this investment in the latest modification of the RAE permit.

There will be 8 ‘wind farms’ on 8 designated hilltop ‘stations’ as shown on the RAE website. and recently in the following post: http://www.facebook.com/notes/petros-avlitis/just-to-make- some-things-clear/10212340924348210

But there have been various modifications in the number and model of wind turbines, and the precise number and location of the wind turbines within the ‘stations’ has not been published by RAE.

Why are people talking about 100 wind turbines on Paros?

This is a reference to a study by the University of Thessaly, commissioned by the Region of South Aegean, which concluded that in Paros there is capacity for 105 wind turbines. (The study apparently based its assessment on national standards which take account of wind conditions etc but not of environmental or socio-economic impact).

How big are these wind turbines?

At least 100 m in total height. The latest modification of the RAE permit specifies the model as ENERCON-70, 2.3 MW output, 71m rotor diameter. The ENERCON brochure states that the turbine is “atop a 64m steel tower” and the technical specifications for this model, which are publicly available, mention that there are other options including a 98m steel tower and 112m concrete tower.

How substantial are the associated works?

The approved environmental terms specify that the new access roads should be 5m wide and should not be tarmacked. However, the experience of the existing wind farm in Paros and similar developments elsewhere is that much wider stretches of access roads are needed and that no effective control can be exercised by the authorities.

There is no mention of the location or size of the installations required for the interconnector (see also below).

The approved environmental terms specify that the wind turbines should be linked to the interconnector with underground cables.

Has this anything to do with the interconnector between Paros and the mainland, which is currently being installed?

No! An interconnector is currently being installed by the Hellenic Electricity Distribution Network Operator which is owned by the Public Power Corporation (DEH) and the related massive works are visible next to the Paros Power Station. Completion is envisaged by 2019. The Power Station will then be placed in ‘cold reserve’ state for five years before a final decision is taken about its future. (The Kopelouzos Group investment will have its own interconnector and will be separate from the electricity supply to Paros).

Has this investment anything to do with the existing 4 wind turbines?

No! This wind farm is owned by a subsidiary of the Public Power Corporation (DEH).

There are local protests and legal action to stop the installation of the wind turbines. What is the legal action about?

There are two appeals at the Council of State (highest court for admin/constitutional matters): by the four municipalities (Paros, Naxos, Tinos, Andros) acting jointly and by Archilochos and local associations from other islands. They both use the same lawyer, who normally represents Naxos, and they are closely coordinated.

The appeals are on the grounds that the approval of environmental terms hasn’t followed the required consultation procedures.

The hearing has been postponed on many occasions and it is now due to take place on 24 May 2017.

How strong is Paros’s legal case against the investment?

There were perfunctory consultations in the other islands and for sure there were no public consultations in Paros so the case is justified and legal opinion suggests that strong public protests will underline the point.

It is claimed by the other side that such consultations were unnecessary in Paros because of the then recent consultations on the General Development Plan for Paros, which included a separate map showing areas unsuitable for the installation of wind turbines. This map defined as unsuitable areas those within 1 km of towns and villages and in this way did not define any of the locations proposed by the Kopelouzos Group as unsuitable, although they are designated as “protected areas” in other parts of the Plan.

How can this investment be stopped?

The Court decision will not necessarily put an end to it! If the approval of environmental terms is thrown out by the Court, the investor can reapply but the local hostility and the highlighted environmental (and socio-economic) impacts could make it difficult for the investor to obtain a new approval.

To put a final end to this, it will be necessary to rescind the RAE permit. RAE has the right to do so if an ‘installation permit’ has not been issued by the Ministry within 30 months of the (most recent issuance) of the ‘production’ permit. As far as one can ascertain from public sources, the period of 30 months has been exceeded and RAE is known to have rescinded permits on these grounds on many occasions.

The other way to put an end to this and discourage further similar proposals would be for the investor to publicly and formally withdraw in the light of local protests and disapproval.

Does it mean that Paros won’t move to renewable energy? Can we have fewer / smaller wind turbines?

The existing wind farm meets around 25% of Paros’s electricity consumption and this already exceeds the 20% ‘Europe 2020’ target which has been adopted also by Greece.

While 100% of donations are devoted to the cause for which they were donated, membership fees must cover the running costs of the END_OF_DOCUMENT_TOKEN_TO_BE_REPLACED